Thierry Fossemalle, has been a professional bassist since the late 1980s.

He has performed thousands of gigs and played on hundreds of recordings on double bass and electric bass.

He has performed at every major festival in Australia and many in Europe. 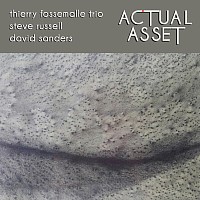 This trio album released in January 2017 , showcases the talents of Steve Russell and David Sanders performing my compositions in a traditional acoustic jazz trio format. Digital versions which include charts of the compositions , a few photos and a short film clip are available here for AU$12 https://thierryfossemalle1.bandcamp.com/album/actual-asset